No.812 Squadron was first formed on the 3rd April 1933, as a Fleet Torpedo Bomber unit, combining No.461 and No.462 flights, aboard H.M.S. Glorious and then serving in the Mediterranean area. The squadron's initial aircraft, were 12 Ripons, but these were later changed to Baffins in January 1934.

In December 1936, the squadron was re-equipped with 12 Swordfish aircraft and continued service with H.M.S. Glorious in the Mediterranean, arriving home in May 1937, to take part in the Coronation Review at Spithead, then back with H.M.S. Glorious, to the Mediterranean and shore base at Hal Far, Malta. This continued throughout the remainder of 1937, 1938 and most of 1939.

At the outbreak of War in 1939, H.M.S. Glorious sailed for the Indian Ocean, searching for Merchant ships and enemy raiders. H.M.S. Glorious underwent another re-fit in January 1940 in Malta, before being called home on the German invasion of Norway. In April 1940, the squadron disembarked and joined the RAF Coastal Command, for mine laying and bombing operations in the coastal area's of Holland, Belgium and France.

No.812 Squadron left Coastal Command in March 1941 and 6 of the squadron aircraft embarked on H.M.S. Argus, to provide anti-submarine protection for a convoy ferrying RAF fighters to Malta. In July 1941, the whole squadron embarked on H.M.S. Furious, reducing it's strength to 9 aircraft, to take part in an attack on the Artic port of Petsamo.

This was followed by further Malta convoy escort duties, initially with H.M.S. Furious and then transferring to H.M.S. Ark Royal in September 1941. H.M.S. Ark Royal was torpedoed on the 13th November 1941 and No.812 Squadron had sufficient aircraft airborne, enabling them to subsequently regroup in Gibraltar.

While based at North Front, the Squadron received new aircraft, equipped with ASV radar and on the 21st December 1941, this was put to good use, when the first sinking of a U-boat at night was achieved, with the loss of U-451. Brief spells were spent aboard H.M.S. Argus by the squadron and during this period, the shore based aircraft damaged a further five U-boats on the surface, during anti-submarine searches. The Squadron returned to the U.K. in April 1942, aboard the American Carrier, U.S.S. Wasp.

The squadron was reduced to 6 aircraft and rejoined Coastal Command in September 1942, for night operations in the English Channel, before amalgamating with No.811 Squadron on the 18th December 1942.

No.812 Squadron was reformed on the 1st June 1944 at H.M.S. Blackcap, Stretton, as a torpedo bomber reconnaissance squadron, equipped with 12 Barracuda II's, this was increased to 16, soon afterwards. On the 13th July 1944, when the squadron were stationed at H.M.S. Jackdaw, Crail, Scotland they had their first casualties since reforming, when an aircraft crashed into a field not far from Crail. Both aircrew were killed, Pilot Petty Officer Blakey and TAG Leading Airman Sargent. Tragedy again struck on the 25th November when the squadron were stationed at H.M.S. Owl, Fearn, Scotland, when two aircraft both attempted to fill a gap, left by an unserviceable aircraft. One aircraft ascended, the other descended, one sitting on top of the other. Both aircraft crashed, killing five of the six aircrew, Pilot Petty Officer Hunt, Observer S/L. Crosthwaite, TAG Leading Airman Hughes, Pilot S/L. Muncer and TAG Leading Airman Balsam. Observer S/L. Saggs survived, with a broken back. By December 1944, the squadron reached it's full strength of 18 aircraft. After a brief spell at H.M.S. Corncrake, Ballyhalbert, Northern Ireland, (a former RAF base) No.812 Squadron embarked on H.M.S. Vengeance, on the 26th January 1945 for a short time, before departing to H.M.S. Wagtail (another former RAF base) at Ayr, Scotland in February 1945.

On the 27th February 1945, No.812 Squadron again embarked on H.M.S. Vengeance, forming the 11th Aircraft Carrier Squadrons, with No.1850 Squadron, who had joined the ship 2 day's earlier. The ship and squadron's were destined for the British Pacific Fleet and due to German U-boat activity in the Clyde Approaches and Irish Sea, (U- 1302) were diverted to the Mediterranean. 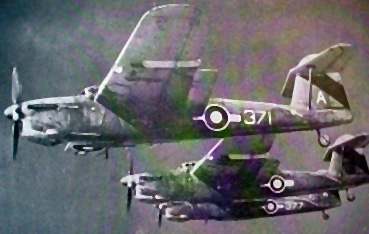 At 12.45hrs. on the 12th March 1945, H.M.S. Vengeance, together with other members of the 11th ACS (Aircraft Carrier Squadrons), H.M.S. Colossus, H.M.S. Glory and H.M.S. Venerable, escorted by Destroyer Escorts, H.M.S. Tartar, H.M.S. Cotton, H.M.S. Inman, H.M.S. Assiniboine, H.M.S. Stockham and H.M.S. Ulysses, left the Clyde and sailed around the North, then West coasts of Ireland towards Gibraltar. On the same day U-260 was sunk off Fastnet Rock, South of Ireland, which may have been waiting for the Fleet.

No.812 Squadron's first base on this trip, was at H.M.S. Falcon, R.N.A.S. Hal Far, Malta, which was not new to the squadron, having been based there on numerous occasions, before being reformed. Arriving at Hal Far on the 20th March 1945, the squadron continued 'working up' procedures and on the 29th March 1945, flew their first sorties over Sicily, with No.1850 Squadron as escort. On the 5th April 1945, aircraft from No.812 Squadron again escorted by No.1850 Squadron (Chance Vought Corsair's Mk.IV) flew to Syracusa, Sicily on bombing raid exercises. On the 6th April 1945, when returning from an Interception Exercise, a pilot from No.1850 Squadron had to bail out from his aircraft. The position was clearly marked and on return to Hal Far, a search for the pilot was launched. After 3 hours, the aircraft returned to Hal Far, then took off again to continue the search, using aluminium markers from 500 feet to ensure an accurate search pattern, this continued for a further 3 hours and again the aircraft returned to Hal Far and a night search commenced. The squadron encountered further casualties on this search, Pilot S/L. J. Birch, Observer S/L. D. Robins and TAG Leading Airman H. Hamill failed to return from the night search, and the Corsair Pilot, S/L. Bardner, was never found. The squadron remained at Hal Far until 23rd April 1945, when they returned to H.M.S. Vengeance in Valletta Harbour, celebrating 'VE Day' on the 8th May 1945, in Malta. The War was now officially over in Europe, although continuing in the Pacific and this is where No.812 Squadron was heading.

On the 8th June 1945, the squadron's next base was at H.M.S. Ukussa, Katukurunda, Ceylon, where they remained, until returning to H.M.S. Vengeance on the 4th July 1945.

The next base for 812 Squadron was H.M.S. Nabswick, Jervis Bay, Australia, (MONAB V) with No.1850 Squadron, arriving on the 22nd July 1945. The squadron remained there in readiness and continued practice procedures in the Pacific, until the 13th August 1945, when they returned to H.M.S. Vengeance, which was anchored in Sydney. With the end of the War imminent, there was a rush to get squadron's re-embarked onto their respective carriers. The squadron was briefed for an operation against a Japanese held Island called Truk, which was still heavily defended. Both No.812 and No.1850 Squadron's, as part of the 11th ACS (Aircraft Carrier Squadrons) was ultimately destined to cover the Invasion of Japan, should this have been required. On the 15th August 1945, (VJ-Day) the Pacific War ended, however, there was no time for celebrations, as H.M.S. Vengeance sailed from Australia, in company with H.M.S. Indomitable, H.M.S. Colossus, and H.M.S. Venerable, followed by cruisers H.M.S. Bermuda and H.M.S. Swiftsure, destroyers H.M.S. Quadrant, H.M.S. Tuscan, H.M.S. Tyrian, H.M.S. Ursa, H.M.S. Kempenfelt and H.M.S. Whirlwind.

The next base for No.812 Squadron, although very short, was Ponam in the Admiralty Isles, this was the British Pacific Fleets forward Operating Base, named H.M.S. Nabaron (MONAB IV), arriving on the 28th August 1945, 5 day's after No.1850 Squadron, and returning to H.M.S. Vengeance on the 30th August 1945.

From there, No.812 Squadron went to Hong Kong, arriving at H.M.S. Nabcatcher, Kai-Tak Airfield, (MONAB VIII) on the 8th October 1945, sometime after the arrival of No.1850 Squadron. During this time the 1st and the 11th ACS (Aircraft Carrier Squadrons) were amalgamated, becoming the 1st ACS. The squadron remained there for almost the rest of the year, leaving on the 28th December 1945 and rejoining H.M.S. Vengeance. In the Royal Hong Kong Yacht Club, there is a plaque, dedicated to the Officer's and Men of H.M.S. Vengeance, who liberated the Club from the Japanese Forces.

No.812 Squadron was re-equipped with 12 Fairey Firefly F1's and FR.1's and their next base was at H.M.S. Nabthorpe (MONAB VI) at Schofields, Sydney, Australia arriving on the 12th January 1946, where the squadron remained, until the 19th March 1946 due to H.M.S. Vengeance being in dry dock for repairs. H.M.S. Vengeance and her two squadron's were transferred from the British Pacific Fleet to the East Indies Fleet and sailed for Ceylon. 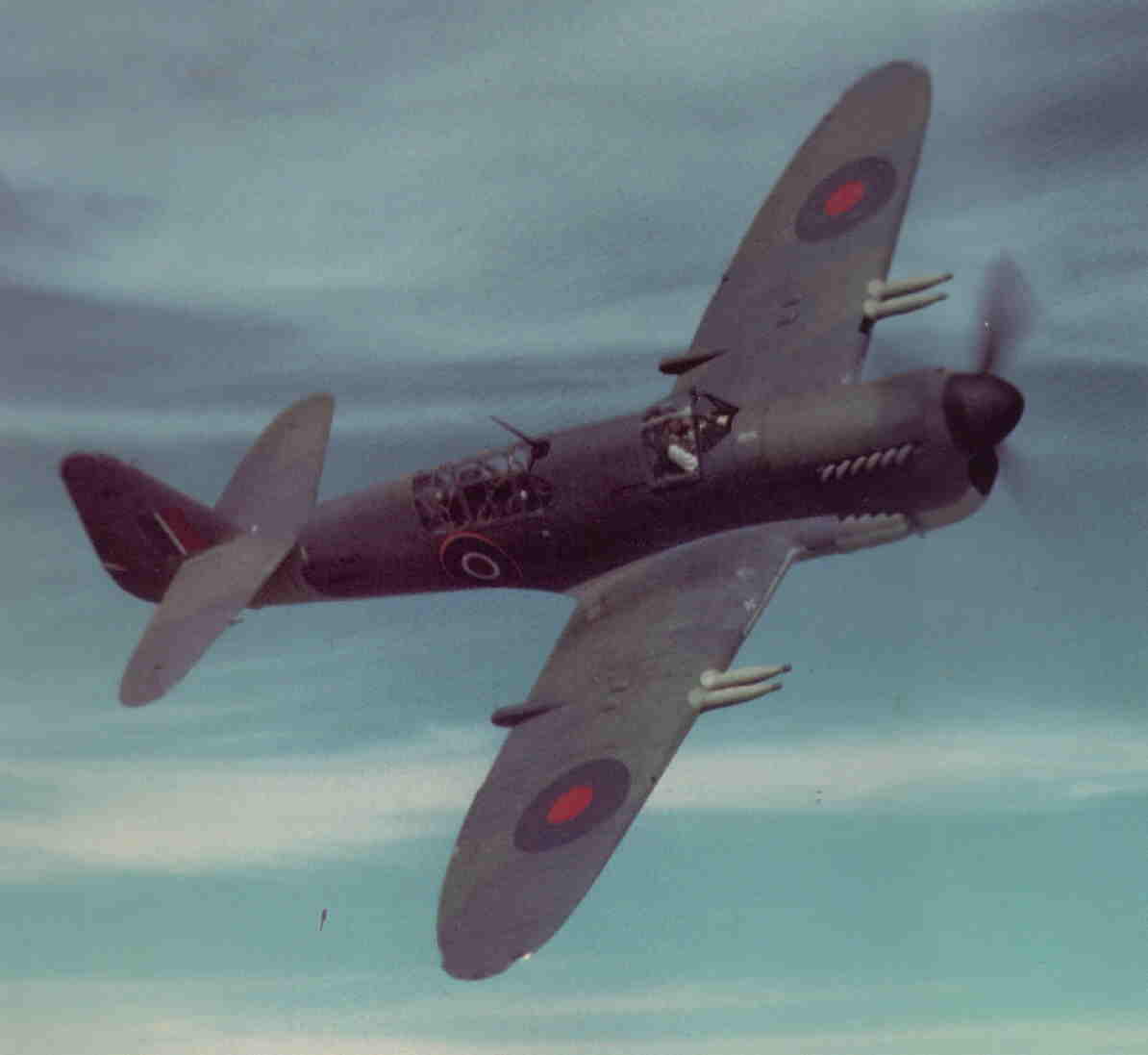 The final base for No.812 Squadron was again at H.M.S. Ukussa, Katukurunda, Ceylon arriving on the 7th April 1946, 2 day's after No.1850 Squadron, the last base for both squadron's, before returning home, departing on the 11th July 1946.

On arrival at Lee-on-Solent on the 12th August 1946, No.812 Squadron was disbanded along with No.1850 Squadron, which coincided with the end of the First Operational Commission of H.M.S. Vengeance.

Although No.812 Squadron was reformed again on the 1st October 1946 at Eglinton, Co. Londonderry, Northern Ireland, it continued as a Royal Navy Squadron, serving on numerous bases and Aircraft Carriers until being disbanded again on the 20th October 1953.

No.812 Squadron was again reformed on the 7th November 1955, again at Eglinton, Northern Ireland, with Gannet ASI aircraft having fewer bases and aircraft carriers this time round and finally being disbanded on the 13th December 1956, the same day H.M.S. Vengeance was sold to the Brazilian Navy.